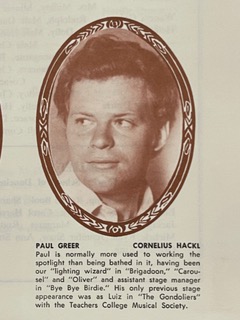 It is with the heaviest of hearts that we let our theatre family know that the inimitable Paul Greer passed away on Friday.

Paul’s love for Arcadians and theatre stretches over decades and the hats he has worn were many and varied. Paul joined Arcadians in 1970 as stage crew for “Brigadoon”. On stage as Cornelius Hackl in “Hello Dolly”(1972) he met the love of his life, the classic ‘showmance’ that lead to a marriage and a beautiful loving family, that fortunately for us continues to weave itself around Arcadians. Paul’s love for his family was second to none, his eyes would be beam, and his smile would shine at the mention of Clare or his boys or when relaying tales about his beloved Grandchildren. His heart was filled with love and pride and it was always an honour to see that part of Paul.

As president of Arcadians Paul brought the many branches of the group to the table, literally inviting representatives from ACT, The Lamplighters and the Auxiliary to join the Board to become more connected as a group. He helped build relationships that united us as we planned the future of Arcadians. Paul was always about what came next, his ability to be inclusive and respectful and allow ideas to successfully flourish is what made him so well respected and genuinely loved. His passion for Arcadians was always on full display, Paul’s faith in people was relentless and he would offer support at every level. Though he stepped down as president for health reasons he was never ever far away from Arcadians.

Paul’s last time on the stage for Arcadians at the Miner’s Lamp was in 2013, where he played Dr Greyburn the family doctor in the Agatha Christie spoof “Something’s Afoot”, which was right up Paul’s alley with corny one-liners that he relished delivering. Since then, he has been involved in some capacity with almost every production at the Miner’s Lamp and when we’ve gone into the IPAC Paul’s leadership and professionalism were invaluable. Roles such as stage managing, lighting design/operator ‘lx cue for fog, always haze when Paul’s in charge’ to set design, builder and manager. Paul was never short of people to be on his team because he valued everyone equally which made it a delight to work with him.

Paul was so proud and humbled when he received his “Life Membership” to the Group. The highest accolade that can be given to a member. 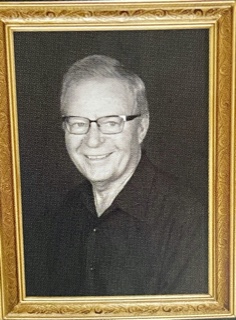 Leading the MMMM (Marvellous Monday Maintenance Men), Paul and his team of workers keep the Miner’s Lamp in tip top shape and again when Paul had to step down for health reasons, he continued to visit with his friends the MMMM and stayed connected to Arcadians right to the very end. Although he had restrictions, Paul continued on his own terms and always with a ‘dad joke’ on hand. His sense of humour and his ability to really see people and be engaged with them, he never looked above you, he always looked at you and listened. He has been a guiding light to so many of us in Arcadians and that’s exactly how we will be remembered. His legacy with Arcadians is immeasurable and will be honoured and respected forever.

To Clare, David, Simon, Michael and John and your families we offer our heartfelt sympathy, Paul was a giant amongst us with a big heart and a warm soul, and his loss will leave a big empty space. We send you all our love and offer our thoughts and prayers during this sad time.

As the haze clears and the lights dim, Paul Greer may have left the stage; but he will never leave our hearts. May he rest in peace.