THE 2017 AUSTRALIAN MALE CHOIR FESTIVAL IS COMING TO WOLLONGONG

For the first time – 400 choristers from male choirs around Australia and New Zealand will visit Wollongong in October 2017 – to conduct their 2017 ‘Festival’, over three days.

The highlight of the Festival will be a spectacular concert, ‘Let All Men Sing’, on Sunday 15 October (2pm), at the WIN Entertainment Centre, with all the choirs singing together, conducted by dual music directors for the first time. Keiren Brandt-Sawdy (Sydney Male Choir) and Tom Buchanan (Australian Welsh Male Choir) will bring out the best from the choristers.

Also, playing a significant part in the concert is the NSW Police Concert Band and local artists “The String Family”, who together with the choristers, will provide a wonderful memorable and entertaining afternoon.

The organisers, the Male Choir Association Australia, is made up of male choirs from all around Australia. The association, like all its member choirs, is a not for profit organisation with the sole purpose of engaging men in song.

The member choirs come from all states, and are made up of men ranging in age from 40 – 90 years young. They give freely of their time to entertain audiences throughout the land.

This year the MCAA are particularly interested in promoting singing to mature men, to encourage them to continue social interaction – and join a ‘musical mens’ shed’ in their area!

The MCAA have performed in all capital cities and with Wollongong being chosen as the location for the 2017 Festival, the MCAA look forward to singing at the WEC. At the same time – the Festival will offer Illawarra and Sydney residents the opportunity to enjoy the very best male choirs of this nation, together in one spectacular concert.

With its origins in the male choir heritage of the mining and industrial towns of the United Kingdom – it is fitting and appropriate that Wollongong, with its similar heritage, plays host to this mass gathering.

And with a wide variety of repertoire – one male choir is truly entertaining – 14 of them and 400 voices will be truly astounding!

Tickets are available for the concert at Ticketmaster from 13 June 2017 – through ticketmaster.com.au phoning 13 61 00 or visiting the WEC Box Office (Mon- Fri – 9am to 5pm)

Further details of the Festival and Concert are available from: http://www.malechoirsassociation.org.au or the local organising MCAA committee chairman Dave Bryars at dbryars@bigpond.net.au 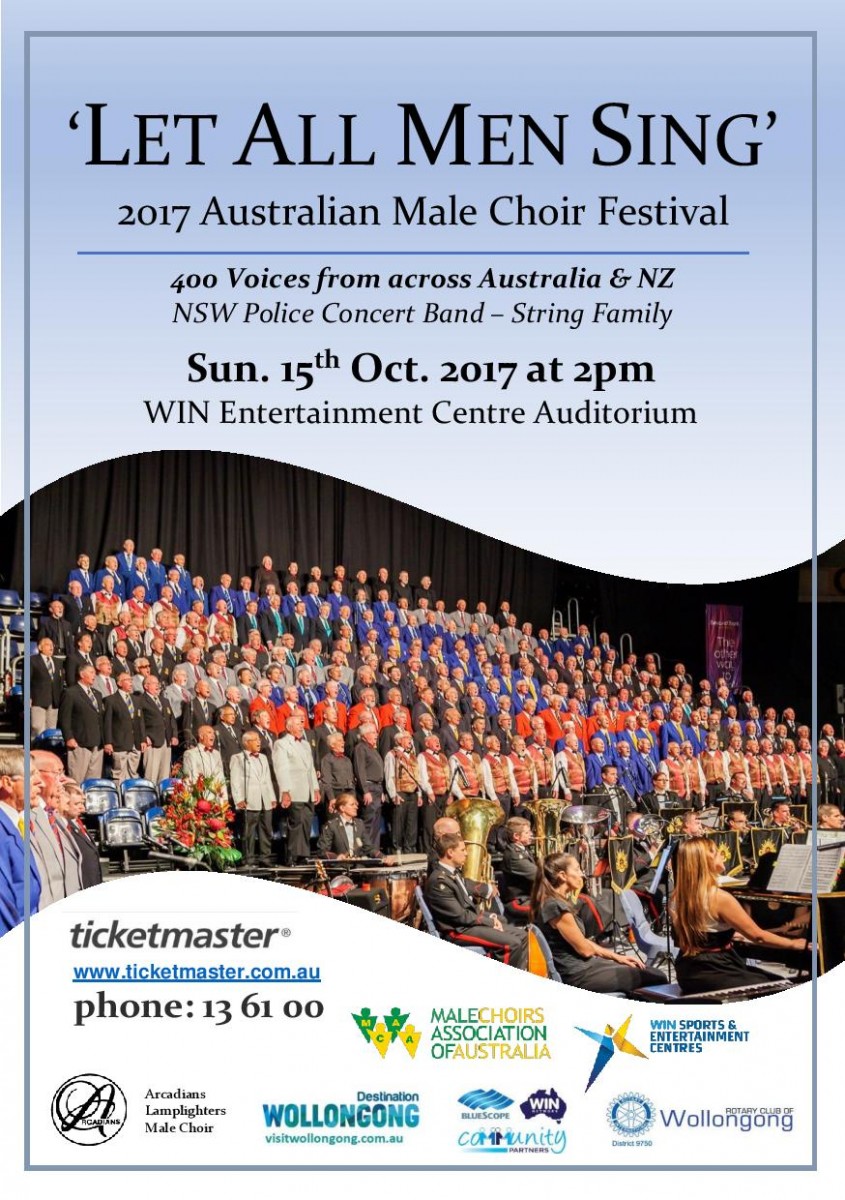