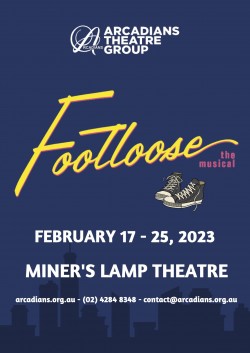 Arcadians Theatre Group
presents
FOOTLOOSE
Stage Adaptation by DEAN PITCHFORD and WALTER BOBBIE
Based on the Original Screenplay by Dean Pitchford
Music by TOM SNOW Lyrics by DEAN PITCHFORD
Additional Music by ERIC CARMEN, SAMMY HAGAR, KENNY LOGGINS and JIM STEINMAN
FOOTLOOSE is presented through special arrangement with ORiGiN Theatrical on behalf of
R & H Theatricals, A Concord Theatricals Company
One of the most explosive movie musicals in recent memory bursts onto the live stage with exhilarating results. 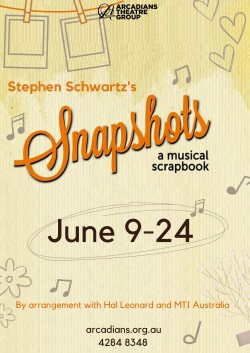 “A Musical Scrapbook” – that’s the subtitle of Snapshots, a collection of Stephen Schwartz songs.

The 58th Annual General Meeting of the Arcadians Theatre Group will be held at the Miner’s Lamp Theatre on Sunday, 19 March at 3.30 pm for a 4 pm start.

Special business to be conducted will include amendments to our Articles of Association to comply with the Register of Cultural Organisations requirements and other changes discussed at the 2022 AGM.

The election of the 2023 Board will also take place.  While some of the current Board intends to stand again, all positions are declared vacant and nominations will be accepted for all positions. We will need a new Treasurer with experience in MYOB (or a willingness to learn) and a new General Board Member as Lauren Eade and Natalie Bazun-Coates have indicated they will stand down to spend more time with their young families.

Both ladies have made invaluable contributions during their time on the Board.  Natalie has revamped the Refreshment Bar. Lauren has set up an accounting system that will enable a smooth transition from one Treasurer to the next and she will assist in any way to ensure this happens.

As approved at the 2022 AGM, nominations in writing must be received by the Secretary at least 3 days prior to the AGM, ie. by 4 pm on 16 March.  Also approved was the election of the Vice President at the AGM rather than by appointment from the General Board Members at the first meeting of the new Board.

Please click on the link for the Nomination Form.

The Minutes of the 2022 AGM, 2022 Report, Agenda for 2023, and Proposed Amendments will be posted on the Arcadians website at the beginning of March.  You will be notified by email when these are available for your perusal.

With a sold out season, it’s time to organise our Front of House crew.  If you are able to assist, please click on the link to go to the sign-up sheet. 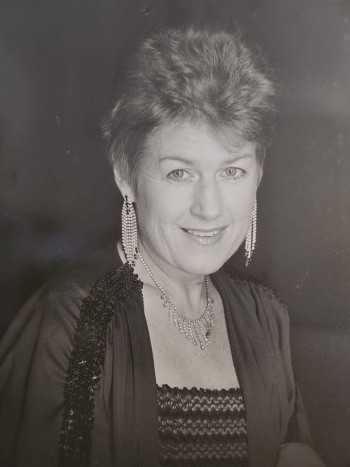 It was our privilege to provide the Miner’s Lamp Theatre for the funeral service of our beloved Life Member Diana Brown recently. Diana passed away surrounded by her loving family after a long illness.

The outpouring of sympathy for Andrew, Susie, Melissa, Antonia, and their families over the past few weeks demonstrates the high regard in which Diana was held by many people in the community. She participated on stage and off with many local theatre companies, Choral Societies, and Church Choirs and they have expressed their gratitude to the family for Diana’s contribution. I will reflect only on her membership of the Arcadians and most probably will not do justice to her impact over the years.

Arcadians have had the benefit of her dedication, love, energy, and enthusiasm for theatre over many, many years. She was not only involved on stage but behind the scenes in so many roles; some of which I will try to capture here.

Some of Diana’s early roles included Mrs Botting (Half a Sixpence, 1981), Mathilda (in the world premiere of Minerva Bird, 1984), Aunt Ella (Oklahoma, 1989), Mrs O’Malley (opposite daughter Susie in the lead role in Funny Girl, 1991) as well as chorus roles in numerous productions. Diana also performed in the touring club show Hitz of the Blitz in its many incarnations over the years. She is probably best known for her betrayal of the cynical Madame Thénardier in our 1993 and 1994 seasons of Les Misérables.

Diana was also heavily involved in the administrative aspects of Arcadians for many years. Roles on the Committee including Liaison Officer where she excelled in welcoming new members and addressing cast needs during rehearsals. As a parent supporting her children in the Arcadians Children’s Theatre company, she assisted in the organisation of Saturday rehearsals and canteen duties on many occasions.

Diana also co-ordinated our School’s Award program which gave feedback to students and teachers on their live school productions. Her ability to organise the Review Committee to attend school performances in conjunction with teachers led to Arcadians being recognised in the School Community as providing valuable insights into production values. The feedback given to students and teachers on their production gave encouragement to develop this art form.

Other duties included Buyer for the Refreshment Bar (canteen as it was formerly known), booking agent and singer with the Arcadian Minstrels (our touring singing group offering entertainment to those less likely to be able to travel to the theatre), and Chairperson and member of the Ladies Auxiliary (which raised funds for vital purchases for the benefit of members).

However, most members will remember her for the slices she baked for the cast at rehearsals and the Monday Maintenance Men working days. Ask anyone and they will say her “Mars Bar Slices” were the best – ever!

So it was only fitting that we were able to make Diana’s farewell special by being held at the Miner’s Lamp Theatre on the set of our Les Misérables production of 2022. I’m sure I speak for everyone who knew Diana at Arcadians that she is missed considerably. We wish Andrew, Susie, Melissa, Antonia and their families our deepest sympathies. She was a pillar of strength to us all.

All positions for 2023 have been filled.  Congratulations to all those who auditioned & were successful.

ACT will be holding OPEN AUDITIONS for 2023

THERE ARE LIMITED SPACES AVAILABLE FOR 2023.

INFORMATION NIGHT – Friday 7th October at 6.30pm at the Miners Lamp Theatre. You will need to attend the information night to book an audition.